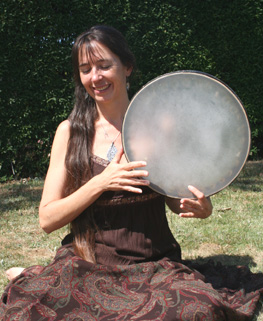 LAURA SHANNON holds an honours degree in Intercultural Studies (1986) and a postgraduate diploma in Dance Movement Therapy (1990), and was recently awarded a Master's degree in Myth, Cosmology and the Sacred at Canterbury Christ Church University in England (2020), where her M.A. dissertation on the esoteric wisdom of women's ritual dances was awarded a Distinction. Laura trained in Sacred Dance at the Findhorn Foundation in 1987 and 1988, and has been a faculty member of the Sacred Dance Department there since 1998. She has been researching and teaching traditional folk dances for over 35 years, specialising in Armenian, Greek, Balkan, and Romani (Gypsy) dances, as well as women's dances, ritual dances and three-measure dances. Laura sees these dances as an ancient mystery school, transmitting information encoded in symbols such as the circle, spiral, zigzag, crescent, and Tree of Life, with roots in the Neolithic civilisations of Old Europe which honoured the Goddess.

Laura's caring, innovative approach to traditional dance bridges the authenticity of the folk dance world with the spiritual intention of the circle dance world. She sees the dances both as a nonverbal language and as a form of spiritual practice, passed down from our ancestors in the human family. In her pioneering way of working, careful attention to style, background, and symbolism gradually illuminates meaning within the movements and encoded wisdom still relevant to our lives today.

Traditional dances embody an ancient worldview of sustainability, community, and reverence for the earth. Laura's teaching seeks to rekindle our understanding of this worldview, to bring greater awareness, gratitude and joy into our dancing and into our lives. Coming from cultures which historically have survived many periods of change, these dances teach skills and transmit messages which can guide us lovingly through difficult times.
Traditional ritual dances also channel and magnify a physical experience of positive energy, akin to the chi we can experience in body-based movement practices such as t'ai chi or qi gong. In traditional dance, just as in those practices, this awakened flow of energy or life force helps to support healing and transformation on all levels.

Laura is deeply committed to supporting traditional music and brings musicians to her workshops whenever possible. She has collaborated with Xenos on CDs of Balkan & Gypsy dance music including Fire in the Feet, Tutti Frutti, and Cirikli; produced a CD of traditional Armenian dance music, Gorani, with Shakeh Major Tchilingirian in Armenia in 2001, and produced three CDs of Greek traditional music, Taxidi, Limani and Lavra. Together with her husband Kostantis Kourmadias and other musicians including Nikolas Angelopoulos and Ruth Hill, Laura performs traditional Greek and Balkan folk music in concerts throughout Greece and Europe.

Laura lives partly with her husband in a tiny village in Greece, overlooking the Aegean sea, and partly in the Findhorn ecological community in northern Scotland, where she has had a home for 20 years.
Laura Shannon trained in Intercultural Studies (1986) and Dance Movement Therapy (1990), and recently completed a Master's degree in Myth, Cosmology and the Sacred at Canterbury Christ Church University in England (2020), where her M.A. dissertation on the esoteric wisdom of women's ritual dances was awarded a Distinction. Laura trained in Sacred Dance at the Findhorn Foundation in Scotland in 1987 and 1988 and with many master teachers. Now considered one of the 'grandmothers' of the worldwide Sacred Circle Dance movement, she has been researching and teaching traditional women's dances from Greece, Armenia and the Balkans for over 35 years. Her writings on dance have appeared in numerous books and periodicals, she edited the book 'String of Pearls: Forty Years of Sacred Dance in the Findhorn Community' in 2011, and writes a regular blog on feminismandreligion.com. Laura has been on the faculty of the Sacred Dance Department at the Findhorn ecological community since 1998, is Founding Director of the non-profit Athena Institute for Women’s Dance and Culture, and in 2018 was made an Honorary Lifetime Member of the Sacred Dance Guild in recognition of her 'significant and lasting contribution to dance as a sacred art'.
A prolific writer, her articles on dance have been published in many languages; recent publications include chapters in the books Spiritual Herstories (Intellect Publishing 2019), Inanna’s Ascent: Reclaiming Female Power (Girl God Press 2018), Re-Enchanting the Academy (Rubedo Press 2017), Revisioning Medusa: from Monster to Divine Wisdom (Girl God Press 2017), Celebrating Seasons of the Goddess (Mago Books 2017), She Rises: How Goddess Feminism, Activism, and Spirituality? Vol 2 (Mago Books 2016), and Dancing on the Earth: Women’s Stories of Healing through Dance (Findhorn Press 2011), as well as scholarly articles in the academic journals Dance, Movement & Spiritualities, Feminist Theology and Walking the Worlds. She also blogs regularly on feminismandreligion.com. For more information about Laura’s articles and publications, please click here.

Laura is founding director of the non-profit Athena Institute for Women’s Dance and Culture. In 2018 Laura was chosen to become an Honorary Lifetime Member of The Sacred Dance Guild, in recognition of her lifelong work representing dance as an expression of the sacred and her 'significant and lasting contribution to dance as a sacred art'.

My dance teachers and key influences include:

I am also profoundly grateful to the ordinary women and men, grandmothers and grandfathers, dancers and musicians I have met since the 1980s at village panegyria and glendia in Greece and at weddings, festivals, and informal gatherings in Albania, Armenia, Bulgaria, Greece, Hungary, Latvia, Romania, Turkey, the former Yugoslavia, and numerous places in North Africa, as well as all those whose homelands I could not visit but whom I had the honour to meet and dance with in other countries. Without all of you, these treasures would have been lost long ago.